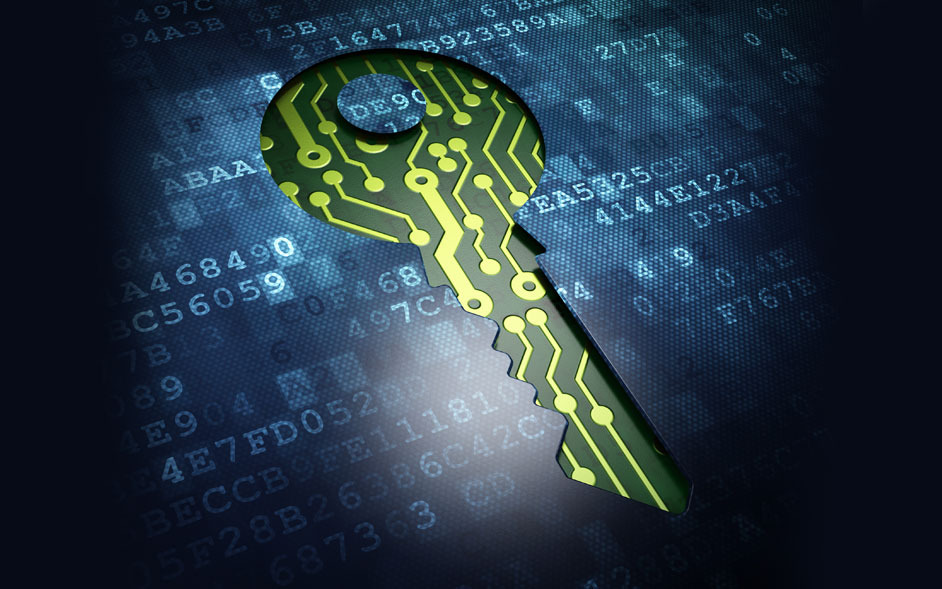 What is secure boot?

Secure boot ensures only authenticated software runs on the device and is achieved by verifying digital signatures of the software prior to executing that code. To achieve secure boot, processor/SoC support is required. In our experience, some of the more secure boot friendly processors with readily available documentation are NXP i.MX/QorIQ Layerscape, Xilinx Zynq, Atmel SAMA5, TI Sitara and Qualcomm Snapdragon series. Some TI Sitara processors (AM335x) might involve TI factory programming of signing keys and custom part numbers.

While secure boot ensures authenticity, it does not protect the device from being counterfeited or prevent hackers from extracting user/application data from the device offline (i.e. reading the non-volatile storage like NAND, eMMC using external hardware mechanisms). User data privacy and protection might be a requirement for compliance such as HIPAA on medical devices. If data confidentiality and/or anti-counterfeit functionality is needed, then software/user data needs to be encrypted. The key used for encrypting the data also needs to be protected.

A typical Linux based system has the below components:

Let’s explore some of the methods to secure each of the above.

Bootloader authentication is processor specific. However the high level mechanism is usually the same, it involves:

The processor ROM code on power-up loads the bootloader along with the signature/certificate appended to it. It then verifies the software by performing the following steps:

FIT stands for Flattened Image Tree and is a single binary that can contain multiple images along with metadata for storing image information along with signatures, thus making it convenient to authenticate. A typical secure boot use case is to generate a FIT image containing kernel, device tree and initramfs. The FIT image is then signed using a private key, and the signature is embedded inside the FIT image. The public key is then embedded inside U-Boot as part of U-Boot device tree. Since the signed U-Boot is authenticated by the ROM, we can trust the public key inside of U-Boot to verify the FIT image.

Verified boot using FIT image is part of mainline U-Boot and FIT image signing is supported by mainline Yocto. Depending on the version of U-Boot/Yocto, certain patches might need to backported.

Instead of using a FIT image, a combined kernel/devicetree/initramfs image can be created, and SoC vendor specific APIs (when available) can be used to verify the combined image (similar to how ROM authenticated bootloader). However, to achieve this, we need good documentation and well-supported bootloader software from the SoC vendor.

Full disk encryption or authentication involves encrypting and/or verifying the contents of the entire disk at a block level. This is performed by the kernel’s device mapper (dm) modules. This method can be used with block devices only (eg: EMMC).

For full disk encryption or authentication, we need an initramfs (initial RAM filesystem) which is a minimal filesystem responsible for:

An alternate approach is to encrypt and authenticate on a file or directory basis. Below are some mechanisms to achieve the same:

Protecting the key used for encryption

On a desktop or cell phone, the key used to encrypt the filesystem is derived from a user password entered interactively. IoT and embedded devices typically do not have this luxury. Hence we need to store and protect the key on the device. Below are some protection mechanisms:

Case Study: Key protection on i.MX without using a TPM

Many external security chips such as TPM are susceptible to I2C bus attacks. Leveraging secure storage capabilities of the main processor is preferred when possible. Using an NXP i.MX processor as an example, let’s explore a method to protect the key without using a TPM. On i.MX, each processor has a unique master key (pre-programmed by NXP) that can only be accessed by the Cryptographic Accelerator and Assurance Module (CAAM) module. A CAAM kernel driver can be written to encrypt filesystem encryption key with the unique processor master key. The encrypted key blob can then be stored in the boot partition. This is done as a part of the manufacturing step. During the boot process a script is run from initramfs to decrypt the key blob using CAAM kernel driver and the plain key is then used to decrypt the root filesystem.

Since secure boot or high assurance boot(HAB) is enabled, we do not have to worry about malicious firmware being able to decrypt the encrypted key blob. Further, the encrypted key blob is unique to each device (because of unique master key) and thus provides anti-counterfeit feature (i.e. if an attacker cloned the contents of the flash to another device, the counterfeit device would not be able to run the software since it can not decrypt the key blob). 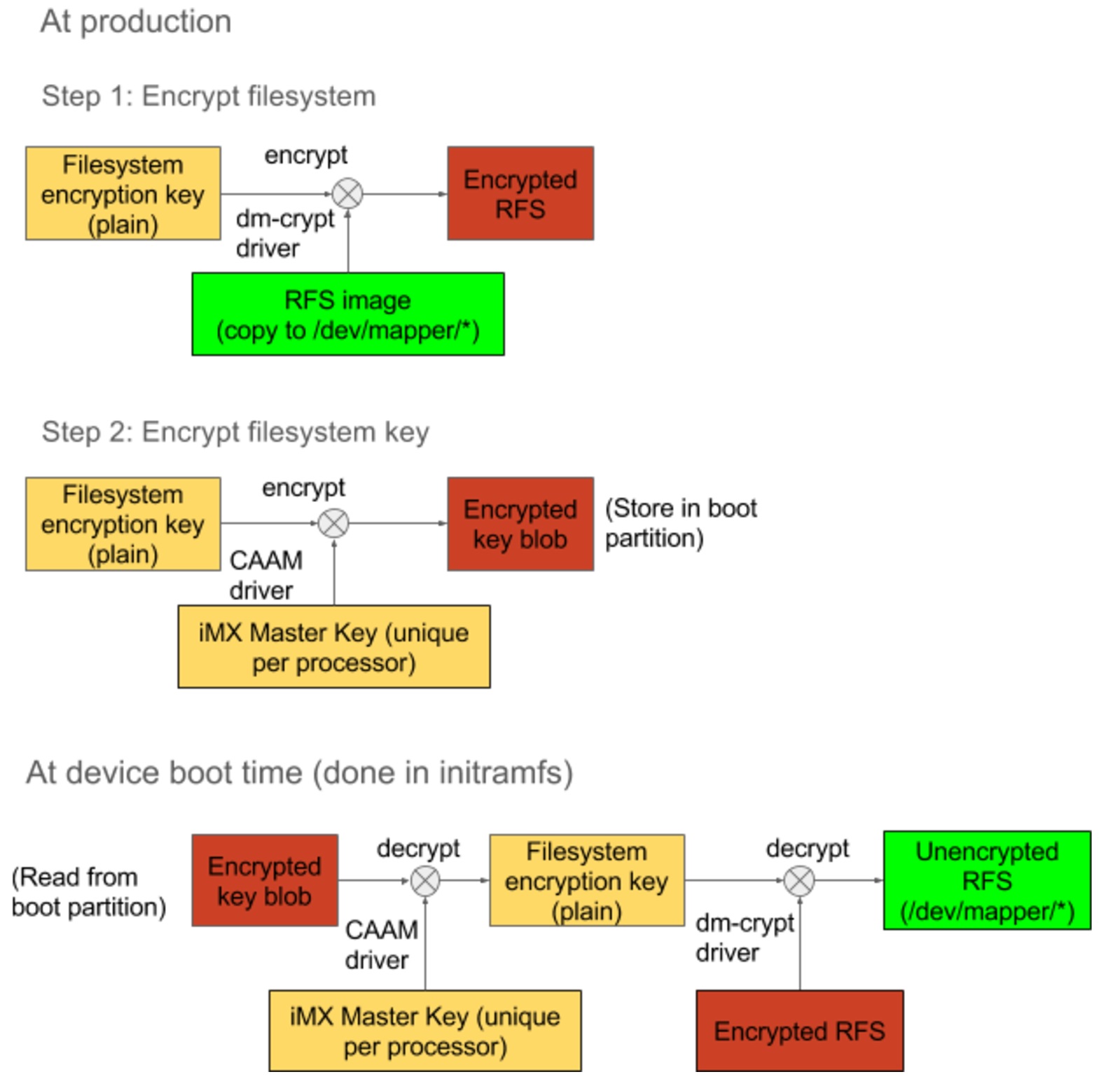 Example partition scheme and its contents

Once signing and encryption schemes have been tested, the next step is to integrate everything back into the build system and manufacturing setups.

Security cannot be introduced as an afterthought; it needs to be baked into the product design. It also has potential impact on device boot times, file system performance, firmware upgrade process, so implementing it early in the process is highly recommended.

Contact us today for help with enabling secure boot and establishing chain of trust on your product.

Next: Learn how to leverage ARM TrustZone and OP-TEE to deploy applications in a hardware isolated secure environment in this blog post.

Akshay Bhat is a Security Architect at Timesys. Akshay’s experience with embedded systems spans a broad range of industries with a focus on board bring-up, driver development and software security. Akshay received his MS in Electrical Engineering from NYU Polytechnic University.